The American people are about to make a choice in the next two weeks and the outcome of the election will alter where discretionary spending is directed over the next four years. To see how this would affect overall Federal Discretionary Spending comparing the last Obama/Biden budget to the Trump budget is likely a good place to start. 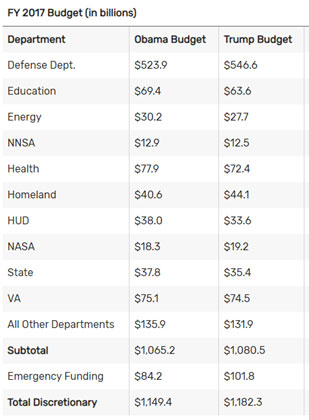 As we can see from looking at the budgets there is not a massive amount of spending change to any of the major agencies. Trump has a little more spending with the military while Obama/Biden spent more w/ HUD and Foreign Aid. With that said the underlying philosophies between the two administrations will change how the money is spent within the agencies.

The Trump Administration is very interested in new weapons systems such as hypersonic missiles, new helicopters and a potential move past the F-35 to a new fifth generation fighter. Additionally the Trump administration had created Space Force and is funding an increasing the number of ICBMs in the US nuclear arsenal. Under the Obama administration we saw a 10% reduction in the number of nuclear weapons. It is likely that a Biden Administration will disband Space Force in favor of a more multinational viewpoint. It is counter intuitive to many but Biden is also more likely to put boots on the ground where the Trump administration has sought to remove the US from foreign wars.

The EPA would likely make major gains in its budget. The Trump administration had felt the agency had become to powerful and was crushing industrial competitiveness. Under a Biden Administration the EPA is likely to regain its standing with a large spending increase over its 2020 budget.

The Trump Administration had a strong focus on the VA and improving its veteran service levels. I would not anticipate Biden making any changes to the path the VA currently has laid out.

The Trump administration has spent a great deal of time on building the US-Mexico wall and to spend effort on rounding up illegal immigrants who have committed crimes in the country. A Biden administration is likely to cut DHS spending in these areas.

Regardless of who wins the Federal Government is likely to go on an infrastructure spending spree post-election will be very large. In 2021 it will likely equal the discretionary spending for the year.

A GSA Schedule can help you take advantage of whichever opportunities present themselves from either the continuation of the Trump Administration or a migration to the Biden Administration.

Why Should You Get A GSA Schedule? Let’s Dig into The Fact

Everything You Need to Get the Contract: A GSA Schedule 70 Checklist

We're live and ready to chat